This website would be missing imperative information without the inclusion of this story, provided by a Liberal Arts University I attended.

The Big Parade could be very accurately called The Big Charade.
This is our modern engineered culture in a nutshell with it's mandatory hive-mind citizenry. 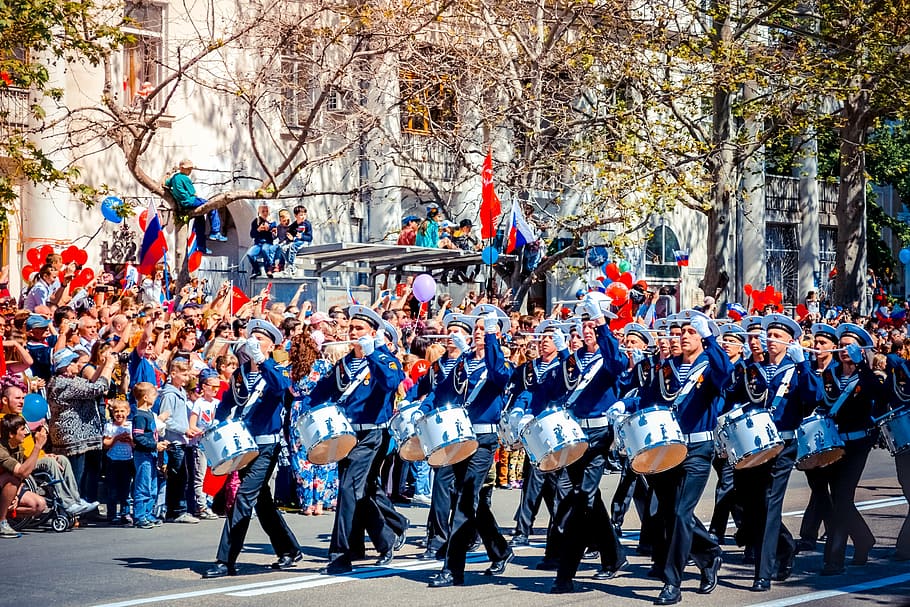 In my 30s, I chose to go back to college as my children were older and it felt like something that was still part of my original life goals that I hadn't accomplished yet.
Because I was already well-researched at this point in my life about luciferian/freemasonry rituals and the true nature of our world... my mind was not as impressionable as most 19-20 year olds that I was attending classes with at the local, regional university.  I had more in common with the professors in most cases than other students.

As many of you know there are courses that every 4-year degree seeking student is obliged to take whether they need them or not. The ENG 101 course was going to be fun as this was a subject near to my heart, and that I generally excelled in. The class consisted of around 24-28 students with myself being the only non-traditional student in this particular class. About 1-2 weeks in, the professor read a story that was startling to me but my later comprehension of the subject matter was much more startling.

The literature or story was not in a text that we had access to as I recall, so the specific title and author I do not know. I do remember the story's details as it was read aloud clearly as it was terrible and stuck with me as a point of reference.

The story was about a culture, a people, a civilization in which there was a very big secret.

The story began with The Big Parade, with great detail about all of the people who were there to celebrate and lined up along the street to see floats and the band march by. The pomp and magnitude of this event was to leave an impression on the hearer.  Everyone in the entire town/civilization was there. They were all cheering and enjoying the spectacular sights and sounds of The Big Parade.

She read that the town and the people had the best of everything. Everything was perfect there. Everyone had a home, a vehicle, a job, and loved their lives.  This civilization was a utopia of sorts as it was described. People were friendly to one another and this culture ran smoothly and efficiently.

The first 2/3 of The Big Parade story was about every detail of this culture of happy people and their well-oiled machine of organization.

Then suddenly a secret was revealed. While all of this happiness and perfection went off without a hitch every single day of the year, it would all come to a crashing halt and end if one thing changed. What was the one thing?

A little boy about the age of 8 or 9 was locked in a closet. He was never allowed out. When anyone came near the door he begged and pleaded for someone to help him... but no one ever did. For if they did, as the story goes... their perfect society would end.

Not much detail was provided as to what would actually happen if someone were to help this boy, only that it was taboo and a big no-no so that things would continue to run smoothly.

Of course anyone with a conscience - or perhaps only those indwelled by the Holy Spirit - would have a serious issue with this story's "minor" detail.

After hearing the story, the professor went on to take a consensus! She literally asked every student in the class whether they would:
A. Keep the secret to keep the civilization running smoothly and do what the story alluded to as 'for the greater good.'
B. Tell someone about it but still continue to go along with the perfect society's rules
C. Do something to help the boy

This was my first introduction into how Universities mold students into good workers for the anti-Christ system.

The results of this consensus was that that every single student chose option A other than me and one other female student who chose B.
I was the only one in the room that not only chose C, but also added "and I would find out who's responsible for allowing it to continue."

Do you think my answer and the professor's results provided to the "higher ups" at the University put me on a watchlist?
In hindsight, I am sure that it wasn't overlooked.

To see the implications of this story, The Big Parade, through the right lens is imperative to seeing what is being hidden in plain sight in our modern culture.
To truly unpack it will take far more than half of a webpage.

The first thing to note in this 'fictional piece' is that the secret to keeping culture running smoothly involves the abuse of a child.
In reality, the ongoing evidence of systematic abuse of children is well-documented. It is not sparse or random incidents but statistics such as 1 out of every 3 children or 1 out of every 4 children experience physical/emotional/sexual abuse! Trauma that stays with them into adulthood and often becomes a cycle for their children.

Those of us who were brought up during the days of Missing Children Faces on milk cartons can attest to the awareness being pushed on us, yet being taught that these incidents were random and not being carried out through organized crime, as it is.

The symbolism used with the finger placed over the lips to "be quiet" and to "keep this secret" is used throughout MK Ultra and Jesuit/Masonic initiatives against children.

The Truth is the enemy of a culture which systematically commits crimes against Humanity.

From a Spiritual and Christian perspective, we know that the fallen angels and their minions within the counterfeit authority system on earth seek to do the will of their master(s), and cannot serve Christ at the same time. They have to choose only one. Military and Intel personnel who have been privy to the knowledge hidden from the public eye and who become whistleblowers are either entrapped or murdered so they are removed from any position of influence.

Why is nothing done to stop it when there are so many agencies set up to 'protect' the public?
Because they serve satan, and protect those who engage in these atrocities. Deception is the rule.
Institutions are set up to terrorize those who seek to stop abuse.

Those who are aware of masonic sexual abuse, of CIA trafficking, FBI / DARPA targeting program and any of the other programs that seek to glorify satan/ba'al/set through the human sacrifice system are blacklisted and persecuted.

Those who claim to be Christians that speak out against truth-telling are often themselves part of the religious institution that harbor pedophiles and masons in their midst. There are MANY wolves in sheep's clothing. Loving America (or any nation) before Christ is idolatry. Those who follow Christ MUST see with the eyes of their heart, with the eyes of God. Ba'al/Satan worship takes many forms in this culture and adults must be bold enough to end it.