Symbolism Will Be Their Downfall - Masonic Mafia

One of the keys to recognizing the Targeted Individual Masonic Silent Dagger program for what it is, and who authored it, is the SYMBOLISM used.
In fact, the human sacrifice cult running the financial systems on earth all use SYMBOLISM and coded language with one another. This is all out in the open now and anyone can see how they operate. It's modeled after Egypt's State/Pharaoh system of slavery.

The devil is a very insecure, prideful ego-based being that rejected God's love and position. He is full of hate and fear... arrogant, a boaster... likes to brag about his evil deeds and leaves his "calling card" at the scene of his activity and crimes. Lucifer is the false light, and Jesus is the True Light.

This characteristic helps make identifying and comprehending what we experience much easier... praise be to the true, living God!

Masonry is rife with symbolism because it's an anti Christ organization, where unspeakable atrocities are happening at the highest "degrees."
The latest "thin blue line" symbolism is Masonic also, not attributed to just police. Most cops are also masons. Which oath they took do you think they keep first ?

If and when you see profiles online or stickers on cars displaying symbology keep in mind their true allegiance... it is not to Christ.

FREEMASONRY IS MYSTERY BABYLON - they are the foot soldiers for human traffickers and blood sacrifice.
Why are so many Masonic Lodges right next to Police Departments?

The all seeing eye symbolism, hand signs, handshakes, "sacred" geometry symbolism and mind control symbology is seen everywhere in pop culture because mind control psyops have been used on human minds since after world war 2.

America founded by masons is modeled after Egypt, symbolism used being the first clue.

A Freemason is a person who knowingly destroys peoples lives for self gain.

Freemasons portray themselves as a good charitable fraternity of men. They own the media so they get to say what they want. They have infiltrated all of society. It is nothing less than an international money making scam (same as the crooked pyramid schemes). Did you know that the ninth degree Masons take their vows to kill for Freemasonry ???? some charity. Masons are also the NWO's foot-soldiers. All secret societies, orders and cults are as one (intertwined) with this evil human virus called "Freemasonry".

Did you know that your local Masonic Lodge and the Lodges within the authorities (council/police) are all houses of corruption ? We pay for these. SF have overwhelming proof. Did you also know that "Freemasons Are The Ultimate Criminal Cowards" ?, They collectively persecute people in a way that only the "Masonic Perps" (perpetrators) and their victim know what's happening. Freemasonry uses all races, old and young people, women (Eastern Star - female Masons). When you talk to a Mason, you are talking to two people. This could be your immediate family, best friend, Politician, Doctor, Police, Judge, Armed Forces, Barrister, Emergency Services, etc. Do you think it's right that the Masons are above or abuse the law ????

Freemasons are the invisible terrorists within the local community. They could literally clear up crime in 24 hours with the technology available. We pay for it and they get to abuse it. Did you know that 90% of Taxi Drivers are Masons. They see, hear and relay all movement and conversation straight back to the Lodge.
Forget worrying about the I.D. cards and eventual Microchip, your mobile phone is your 24/7 electronic tag. They already know your every move and calls since you bought one. Now, don't get us wrong, we all need security and we do respect the non-Masonic government officials and non-Masonic professional people. Freemasonry is illegal under International Law, Humanitarian Law and Common Sense Law.

A Freemason is a fool and a tool to be used by the establishment. There are 5 million Masons worldwide paying money (crooked Masonic businesses pay lots more) to the very wealthy American/Israelis families.
This is where the gigantic amounts of cash go every week. What idiot would want to make the rich even richer ? All we can say to Masons is that when you were born, you knew nothing. Why don't you ask your organization for answers. Beware of one sided answers. Get online and do your own research.

This level of deception is not for the faint of heart because if you are not indwelt by the Holy Spirit you might miss it entirely.

Freemasons and Easter Star are outwardly considered "Service Organizations" and spoken of highly by worldly sources.
That is how far-reaching the SATANIC/LUCIFERIAN Blood Cult reaches. It is Leviathan. Try and find a US State/City without
a Luciferian Masonic Lodge ruling over it serving their master.

But Satan/Lucifer TRANSFORMS himself into an angel of light...
The deception is in the difference between the outward perception and the inner realities of these Satanic groups.

It is imperative to know the enemy. Do not be deceived.

Masons/Eastern Star are installed in all top positions within society. This is by design!

How many Americans are aware of the paedophilia and cannabalism linked to Freemasonry in many nations?

This one is pretty obvious to TIs.
The popularity of the "Punisher" logo with its skull and evil expression represents more than just a Marvel character...
It is satanic to the core.

This one is frequently used by perps and gangstalkers because the Masonic Silent Dagger is considered extrajudicial and covert "punishment" of a targeted individual.

The "punisher" symbol is used by freemasons, mafia, and all level of evil ones in our modern Luciferian culture.
I've seen it used by a guy bragging about raping women!

And the mafia drug thug they moved in onto the court next to mine has this symbol right on the driver side of one of his yellow mustangs... what a coincidence! He made sure I saw it when he stalked me as I walked down the road during the spring of 2020.

This symbol is used by masonic mafia trolls pretending to be "patriots" on social media often. Skulls in general are used by the death cabal brotherhood of the snake.

Reading the language of Symbolism is an essential skill for everyone and especially those targeted by satanic psychopaths.

This webpage is a good primer on symbolism.

When you recognize certain symbols throughout your day it presents to you a Big Picture perspective.
You will notice the majority of media is anti-Christian in nature and is meant for programming your mind.

Trauma-based mind control is a method that has been used on the American public since at least WW2.
Some see the Disney logo and immediately associate it with mind control and pedophilia. Others see it as
just a cute symbol about innocent cartoons. But once you know the truth, you cannot "unsee" it.

It is always better to be overinformed, than ignorant. The Holy Spirit will guide you into all truth!

A little more information on this "good ole boy" club with ties to pedophilia, murder, and satanism.

It is wise for anyone interested in what really goes on behind closed doors to do a little research into some of the leaked masonic rituals - Christians in particular should be aware that masons walk down an aisle with little boys dressed in wedding dresses at a certain "degree" and that child molestation, pedophilia, and even adrenochrome harvesting is linked to these psychopaths. Anyone beyond the 3rd "degree" knows they are nothing more than depraved mafia thugs and slaves of satan.

From Masonic Mayhem here are a few screenshots of pertinent information that ought to be public knowledge and not "hidden" and covered up by cops & politicians. 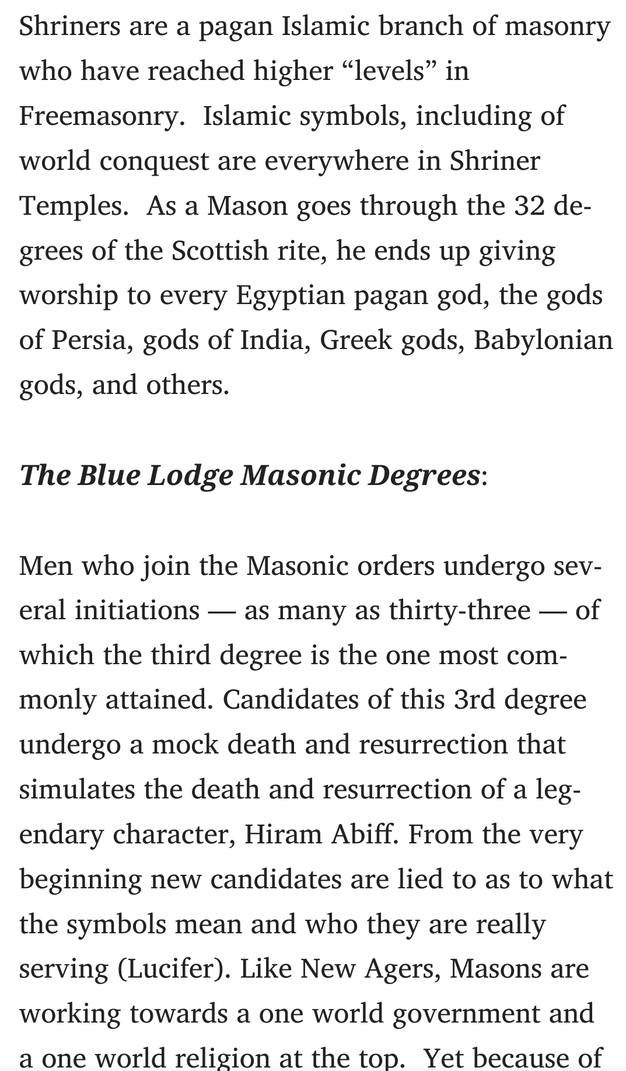 In the Bible, Jesus Christ is the stone "the builders - Freemasons" rejected. It is still true today.
Proverbs warns young men not to go along with those who lay snares for the innocent and whose feet are quick to shed blood.
Masons have gone by many names throughout history. They are the Seed of Cain, the children of Disobedience.

The satanic network on earth is a vast leviathan of Mafia Rule and the "Brotherhood of the Snake."

This network of criminals and enemies of Jesus Christ freely commit crimes as a lifestyle with no repercussions from the system which was created to protect their crimes and punish those who dare expose and report them. The police departments around the world have a code of silence. The Federal agencies who pose as "investigative" bodies have been covering up massive crimes for decades.

Controlling public perception is of the utmost importance to Satanic Network at large.
That's why their gatekeepers are positioned in EVERY industry and level of modern society.
They are bureaucracy.
They are murderers.
They are mainstream religion
They are media.

From long before Biblical days, the spawn of satan have been ruling human affairs.

If Jesus Christ is the Way, the Truth, and the Life - as I and true Believers know Him to be - then to participate in or cover up this satanic network is unacceptable
and an abomination to God.

They hoard money, weapons, and resources. They choose to create hell on earth and destroy instead of create. They hate life, God's Creation.
An enemy of God is an enemy of a Child of God. What fellowship hath Light with darkness?

The Masonic Mafia is satan's "brute squad" for his anti-Christ system. That's why every single country, state, and city is ran by masons.
Liars, Murderers, Pedophiles... the wicked disguised as an "angel of light." They need the organization to get away with their crimes.
Anyone defending masons (or eastern star) is not to be trusted.

We live in a MAFIA rule culture. The fact that so many people don't believe this or don't care should be serious cause for alarm.